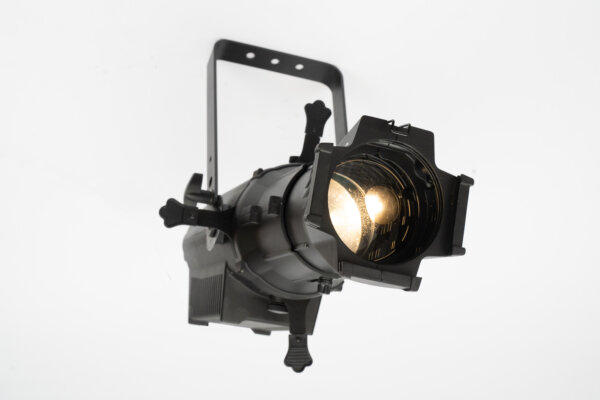 The elektraLite Stingray 600w Variable White brings the latest led technology incorporating  a 600watt COB led and a CRI of 95.

The COB single source led is far superior to any multi source led, because of its power, efficacy and flat field. No need to optimize or add frost filtering for multiple leds.

The choice of a 600w COB source allows the fixture to blend with either the Stingray 300w Warm White or Cool White fixtures. Great importance is taken to make sure color temperatures are even across the entire beam

The fixture sophisticated proprietary diffraction lensing system has interchangeable lenses with 5°, 10°, 19°, 26°, 36° and 50° beam spreads.
There is also available two zoom lens tubes : 12-30 degrees and 25-50 degrees. Apart from perfect flat field, the Stingray 600w Variable White has four independent shutter blades which render perfect in‐focus cuts to the beam.
A quick 360° rotating barrel allows for the shutters to be in any position. The barrel’s quick release allows for easy cleaning of lenses.

The display is an LCD touch screen and rotary knobs allows for quick and easy changes to all the fixture’s features.

The Stingray 600w Variable White has 5pin XLR connectors for both in and thru control using DMX/RDM.
A single yoke, safety eye bolt and safety cable are included. Industry standard Powercon in and out connectors allow quick connection and daisy chaining of fixtures.

Each fixture includes the following accessories:

There are no reviews yet.