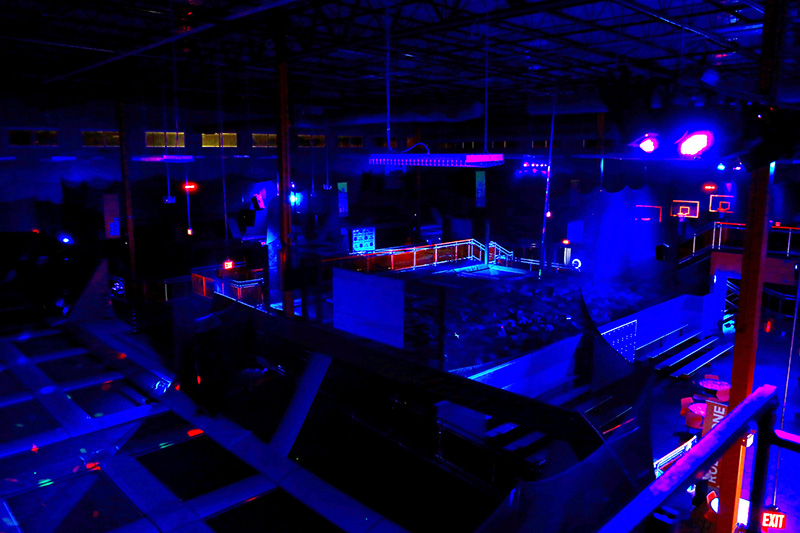 A couple of nights a week at select Sky Zone Trampoline Parks, the main lights are switched off—and new elektraLite eyeBall UV fixtures are turned on—for an event called “Glow” where participants wear neon clothing and bring or buy glowing swag items to engage in the interactive games at the park in the dark.

There’s the Foam Zone with 10,000 foam cubes in a pit, SkySlam basketball at 10 feet in the air, and Ultimate Dodgeball with wall‐to‐wall trampolines as the field. Customers do all that and more of the park’s “fun fitness” games in the dark with UV lighting and a glowing T‐shirt to guide them. Live DJs, dance parties and contests, glowing paint and other accessories make Glow a true black light party experience.

“By outfitting our parks with UV lights, RGB LEDs, twinkling lasers and an array of other amazing lighting options, we can transform our space with the flip of a switch to an entirely new and unforgettable experience,” says Alex Benepe, director of programs for Sky Zone. “We’ve seen huge surges in our Friday and Saturday night attendance and great demand in booking private parties and events during Glow events.”

Luke Robinson, the system designer/installer with Audio Gods in Bensalem, PA, has completed 10 park locations with equipment for Glow, with seven more to be finished in coming months. Since April, he’s focused on the park’s installations on the East Coast, installing between 40 and 50 elektraLite eyeBall UV fixtures for each Glow. (Different vendors are outfitting other locations, so not all of the lighting specs are standard throughout the chain of 136 worldwide locations.)

Robinson had two versions of the ultraviolet elektraLite eyeBall to choose from: UV (385 nm) and IUV (365 nm). Both deliver fluorescence at distances exceeding 75 feet. However, Robinson has chosen the UV version specifically for its true spectrum properties. “The IUV is invisible light that only reacts to fluorescent colors, while the regular UV has some purple light to it so that you can see. We are only using the 385 nanometer UV version,” he explains. “This eyeBall is closer to a true UV spectrum versus most other manufacturers’ 390 nanometer—which is closer to a purple light—so you get better reactivity to neon surfaces.”

He says that when other brands of UV fixtures were discussed, “This one blew the park owners away. elektraLite’s eyeBall was way better.” He also wanted LED fixtures because of the lower electrical draw and other benefits, such as longer lasting light sources. “I did some research and the eyeBall fixture was the brightest that I could find at a reasonable price point.”

The eyeBall also comes with a range of five multiple lenses, “a big deal” for this project, he says. “When we position the light, we can use a different lens to give a wide light or a narrower beam, depending on our location. We generally use the 60‐degree lenses, but sometimes the narrower ones are needed as well. Nobody else has that option for something in this class.”

The eyeBall fixtures are compact and easily mountable, weighing less than five pounds each. Robinson has been mounting them on10 bars of truss in each location with between four to six fixtures on each bar, depending on where it is and what it needs to fit. He uses blueprints from each park to map out the lighting configuration for each location.

Robinson has outfitted 10 Sky Zone locations with elektraLite eyeBall UV fixtures in Pennsylvania, Delaware, New Jersey, Massachusetts, Ohio, Connecticut and New York. He just signed on to complete five more locations in August in Michigan and two more in the coming months in Pennsylvania. Beyond that, Benepe adds that Sky Zone is currently operating Glow events in Canada and Mexico, as well, and plans a Glow installation at its new Freedome park in the UK. At Sky Zone Australia, they also present a special nighttime lighting event called “Vault.”

“Glow has been a fantastic program for Sky Zone and our guests,” Benepe says.