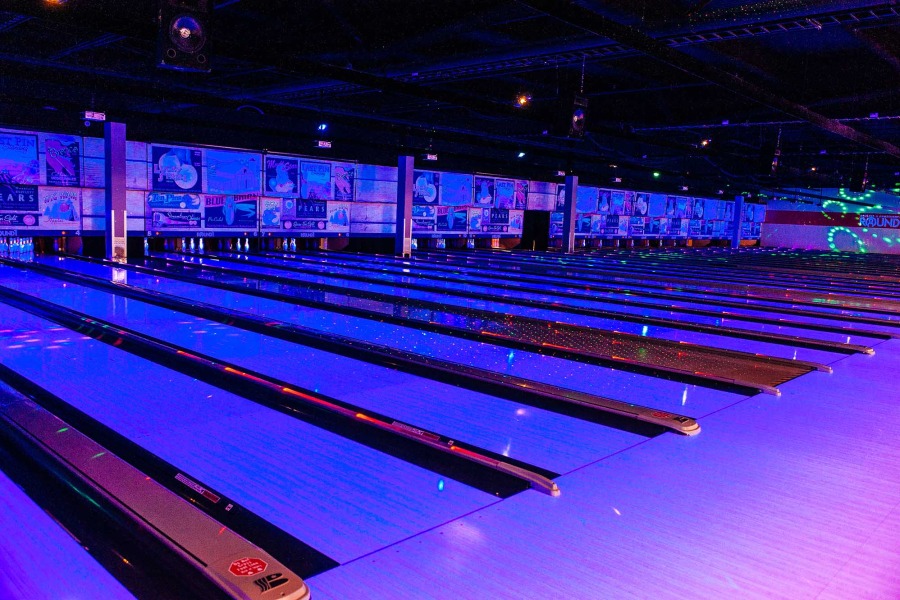 For Cosmic Bowling night, house lights go dark and the lanes beckon bowlers inan electrifying glow of colored beams, with spinning gobo patterns swirling around the space. To achieve this, Round One Entertainment, owner of the upscale Round1 bowling and amusement center chain, is currently installing elektraLite’s newly released ML-902 LED moving profile spot fixture into all of its US locations to electrify the night.

Edwards Technologies of El Segundo, CA is specifying and installing the products with Guy O’Hazza in charge of the project. O’Hazza is experienced with the entertainment center’s special lighting needs, having augmented other similar game/arcade/bowling complexes with lighting.

Round One Entertainment approached Edwards Technologies because their previous fixtures were discontinued, so they desired an upgrade with new technology. O’Hazza recommended the brand new elektraLite ML-902.

“The ML-902 is bigger, brighter, more durable than its earlier version, the ML602,” O’Hazza says. “They’re installed for ‘cosmic lighting’, suspended over the lanes so they create the atmosphere of excitement in the bowling area.”

Fixture count ranges between six and 12 units per location, depending on the number of lanes to be lit.

O’Hazza particularly needed the ML-902‘s multiple gobo and interchangeable gobo features to create the effects. Linear dots,spirals, bubbles and stars are among the 18 patterns supplied. “We can even point the gobos to a mirror ball and it’s a great effect.”

With a seven-color indexable color wheel, plus a rotating five-point prism and strobing features, the ML-902 offers the bowling center a variety of options for creating an eye-popping light show. “When they have a special event, the staff has a pre-programmed touch screen where they can trigger the lights to run to a program with the music, like a dance club,” O’Hazza points out.

The indigo filter is particularly useful in creating a blacklight look, he adds. “The whole place glows in the dark when they use that effect. The balls and pins glow in the dark, as well as people’s clothing. They put blacklights over the entire floor late at night, and the 902s enhance that.”

Other features of the full-featured profile head moving spot that work well for the bowling lanes include its energy savings, with a 120W cool white COB LED, a bright white light equivalent to a 250W HMI lamp. The elektraLite ML-902 offers more of the features of big league moving profile fixtures. But it makes the team because of its lower 30-pound weight and compact size, allowing it to fit into the tight spaces above the lanes, yet quiet enough to not interfere with the bowlers’ concentration.

And priced for the budget, the elektraLite ML-902 will leave Round One Entertainment some money to—pardon the pun—spare. O’Hazza says the ML-902 fixtures have scored well not only with the public but with the bowling chain executives. “I’ve gotten a brilliant reaction. It serves them well. It is enjoyed by all ages. You don’t force them to have fun—you allow them to have the fun they’ve been missing.”

Edwards Technologies has completed eight locations for the chain, with a ninth now in progress. Established in April 2009, Round One Entertainment currently lists its 14 Round1 locations in six retail malls in California, two in Texas, and one in Colorado, Georgia,Illinois, Massachusetts, Pennsylvania and Washington.

For more information on Round One Entertainment and its locations, visit www.round1usa.com.
Edwards Technologies can likewise be found online at www.edwardstechnologies.com.