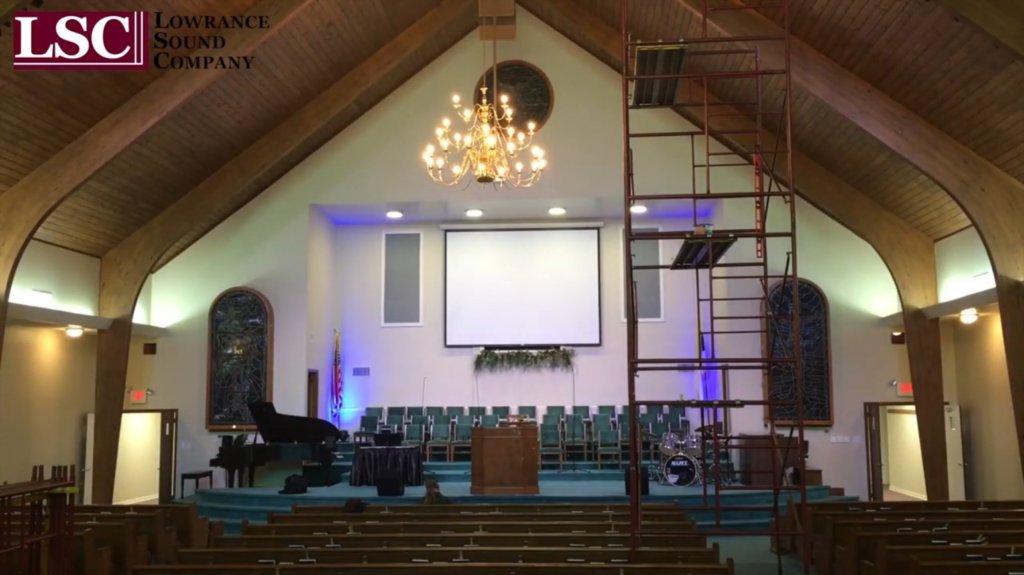 With the recent installation of a dozen elektraLite eyeBall LED lighting fixtures, worship services and music programs are now “brighter and better” at Hillcrest Baptist Church in Dyersburg, Tennessee, a town approximately 80 miles northeast of Memphis.

Systems integrator Lowrance Sound Company (LSC) of nearby Union City was called in to rectify the church’s former “homemade” lighting situation, which was, as LSC Systems Engineer Carl Lowrance describes it, “flood lights on an extension cord.” Lowrance explains, “Wayne Day, a music minister, had come in and started renovating and decided that those flood lights simply wouldn’t cut it”—especially seeing that he wanted to integrate contemporary, traditional and Southern gospel music styles, along with both children and adult choir programs.

LSC turned to its dealer rep, Quest Marketing in Miami Beach, Florida, for suggestions and support. Quest offered LSC some elektraLite demo fixtures to give the church a preview of the potential installation. Lowrance notes that the church had to overcome several issues, a main one concerning the shadows cast from the stained glass windows onto the pulpit. “The church didn’t really have a budget, but we knew they needed general lighting—not extremely bright intensity, but they had to overcome ambient light, eliminate shadows on the pastor for video recording, and wash the stage to promote better audience viewing.” Reviewing the elektraLite product line, Lowrance took into account the low power requirements of the manufacturer’s LED fixtures, the beam angles needed, and the affordable solution they would provide.

As a result, in January, LSC installed a dozen elektraLite eyeBall 5‐in‐1 LED lighting fixtures (ELE729), hung six per side of the room up in the rafter beams above the pews. “We determined that the eyeBall fixture would give us a corresponding amount of light to overcome the ambient light from the stained glass window. For general use, we gave them an appropriate light for house usage and video recording. Having used the eyeBalls at another house of worship for downlight, we knew that the fixtures with 10 degree variant would give off an enormous amount of light. And it gave us the output and the color variation we needed,” Lowrance explains. “Also, because of the compact size and the low weight of the eyeBalls [less than five pounds each], we could forego any trussing or major reworking at the sanctuary to provide a mounting point. Having lightweight housing allowed us to mount them to a beam and keep them hidden from audience view, so we obtained our goal while adhering to the aesthetics of the venue.” Lowrance adds, “It gave us close to a standard 45‐degree angle from the platform, so that allowed us to achieve a two‐point lighting scenario, which provided us with cross lighting across the stage and direct lighting on the piano locations.” 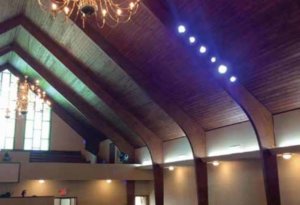 Using the elektraLite RGBAW fixtures provides the altar and pulpit area with a wash of red, green, blue, amber and white colors. LSC also put together a short “before and after” video presentation to show the effect that the lighting had on eliminating shadows, promoting ease of viewing and offering control of color and intensity. The reaction to the installation has been “purely positive,” Lowrance notes. “It also helps the elderly to more clearly see the stage. The fixtures fix the shadowing issue. There were so many odd shadows being cast, which were almost silhouettes. One can actually gauge depth once more without shadows across the stage.” Surprisingly, some members didn’t even realize that light fixtures were added,as they blended in so well with the aesthetics of the sanctuary, he notes.

Lowrance also had good praise to give elektraLite as well. “Part of making this a cost‐effective and nice, easy solution is that we used the wireless DMX transmitter and two receivers. Each fixture comes with a DMX cable, power cable and, most important, 10 out‐changers and a nice interconnect cable. This means—out of the box—the fixture has a power cable, DMX cable and interconnects to link cables together [via daisy‐chaining], so that saves on money overall,” he says.

LSC is a family‐owned business started in 1975 by Carl Lowrance’s father, Mark. The company is celebrating more than 40 years of sales and service as a multimedia integration company handling lighting, audio and video systems, and acoustics. Their installations include theaters, auditoriums, arenas, churches, classrooms, boardrooms, sports and hospitality, as well as for the single homeowner who simply needs a microphone and a cable.

More info can be found at www.lowrancesoundcompany.com.
Hillcrest Baptist Church can likewise be found online at www.hillcrestdyersburg.com.