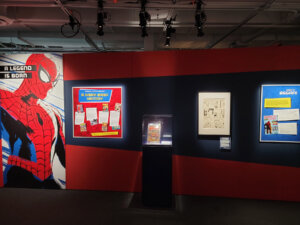 Comic-Con, the global comic-book convention and entertainment event held annually in San Diego since its founding as a tiny gathering of fans in a hotel basement in 1970, has become the international focal point for this multi-genre art form. Last November, San Diego Comic Convention, parent company of Comic-Con, opened its long-awaited Comic-Con Museum, which will curate the best of what is often featured at Comic-Con’s annual convention. Of note is one of its most immersive exhibits, Marvel’s Spider-Man: Beyond Amazing – The Exhibition. Produced by Semmel Exhibitions, in association with Marvel and San Diego Comic Convention, the project opened on July 1 and is celebrating 60 years of the renowned web-slinger’s presence in the comic book hero pantheon.

Both the exhibition and Comic-Con Museum benefit from a particular technology that literally helps illuminate Spider-Man’s importance: elektraLite’s leading-edge Stingray Mini 20-watt LED profile spot fixture. One hundred and twenty-eight Stingray Minis, sold through Intelligent Lighting Creations and specified by lighting design studio Lightswitch, now light up the exhibition at an art-gallery level. Specifically, the exhibit is using 92 of the Stingray Mini’s 50-degree beam-spread model and 36 of the 36-degree model, all of them ceiling-mounted. 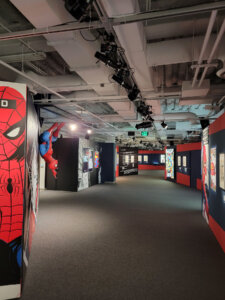 “This exhibit and the lighting we’ve designed and implemented for it truly reflects how comic book art in general, and especially iconic characters like Spider-Man in particular, are worthy of the status of classic art works. As such, they deserve the kind of lighting that we were able to provide with the elektraLite Stingray Mini,” says John Featherstone, Partner and Principal at Lightswitch and a veteran pop-culture lighting designer himself, having LD-ed tours for numerous music artists including The Smiths, Hans Zimmer, and INXS.

Featherstone says they followed the design approach of Berlin-based firm Studio TK, which created the exhibit’s overall design, supported by the efforts of Technical Director Heiko Schallenberg, Project Managers Seth! Leary and Astrid Lehmann, and Director Christoph Scholz. The design utilizes one fixture per display piece in most cases. “We wanted a very precise gallery effect, which is the gestalt of the entire exhibit,” he says. “It would be easy to just flood the walls with light and have it bounce around. But the intent was to make it feel as though you are stepping into an art gallery, one that could just as easily be displaying Monets or Warhols. I was introduced to the Stingray Mini by our amazing project electrician, David Verkade, and knew right away it was a winner.” 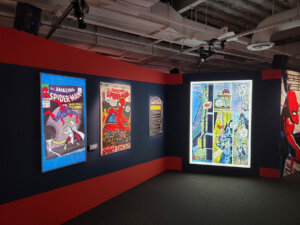 As important, Featherstone stresses, is the Stingray Mini’s low infrared and UV emissions, which he points out are critical for preserving delicate artwork. “We tested several fixtures and looked closely at their specifications, and only the Stingray Mini gave us the ability to execute the look and feel that we wanted to achieve artistically and curatorially, and do so within budget,” he says. “And that last point is important because these fixtures were also intended to become a permanent part of the Comic-Con Museum’s inventory. So the Stingray Mini helped us reach our goals creatively, executionally, and financially—all three areas that have to work together for museums to succeed today.” 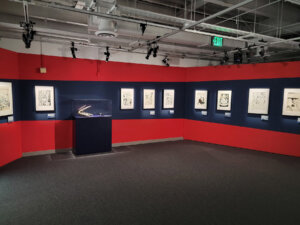 For more information on Marvel’s Spider-Man: Beyond Amazing – The Exhibition at the Comic-Con Museum, visit www.comic-con.org. Lightswitch, Intelligent Lighting Creations, and Semmel Exhibitions can be found online at www.lightswitch.net, www.ilc.com, and www.semmel-exhibitions.com, respectively.