Low ceilings, long and narrow sanctuary, dark corners and a small budget. The production team at Faith Community Church in Red Oak, Iowa, had a host of challenges in modernizing this worship space. The old pars and dimmer system just weren’t shining light where it was needed.

Seeking guidance, church tech Jonathan Showalter consulted with dealer/integrator CCI Solutions, which has worked with the church since 2003 on their sound, lighting and video systems. The answer from CCI’s Dale Erickson came in the form of 30 elektraLite eyeBall LED fixtures.

Erickson factored in all of the church’s needs and suggested the eyeBall fixtures because “quality and versatility of light is always my first concern,” he says. “elektraLite is great for that. With the different beam spreads and accessories they offer in the eyeBall, the design can be an actual ‘design.’ Then the attractive form factor makes it fit nicely in a room like this where you can’t hide anything. And with all of that, the surprise is that the price is very attractive as well.”

Showalter explained the 250-capacity sanctuary’s lighting issues prior to the installation: The small sanctuary was a dark, long and narrow room: 80 feet long and 40 feet wide. The church’s low A-frame ceiling at 16 feet made it difficult to hang lights, so when they hired an outside lighting contractor to bring in gear for special shows, a bulky truss blocked the video screen and created shadowing. Plus, the uncomfortable heat emitting from the traditional Pars made the 50 choir members sweat.

The church fundraising campaign raised the needed budget earmarked exclusively for new lighting. The team considered several other lighting packages from other manufacturers, but the cost was prohibitive, Showalter explains.

CCI’s recommendation of the 30 elektraLite eyeBall LED fixtures helped solve all of those issues—ease of hanging, not blocking the view, no heat, and priced for their budget—and they bought them sight unseen, he adds. 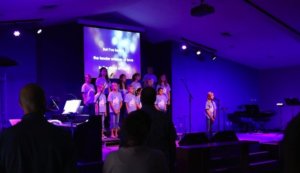 “I was praying a lot because I had not seen the lights work before, so I was trusting CCI and their guidance,” Showalter says. “As soon as I pulled them out of the box, I could see the quality difference from the other fixtures right out of the gate. We are huge fans of the quality and value of these lights. They match what some friends have for twice the price.”

The aptly named elektraLite fixture resembles an eyeball, with a ring of seven 12-watt LEDs, which can be color mixed for the desired shade, and are available in a several “flavors,” including quad RGBW, five-in-one RGBWA and other versions. Designed for tight and low spaces, the compact LED unit, weighing less than five pounds, has a low profile and double yoke, allowing it to be mounted on floors or hung for more units per space.

“We put up a Unistrut (metal framing system) to the ceiling,” Showalter says, “and then we built a small bracket that would attach to the Unistrut and mounted the lights level, so it was not mounted at an angle. Now we can tuck up everything in the ceiling for a clear line of sight.”

There was another unexpected bonus with choosing the LED fixtures, Showalter adds. “We had to put in an all new electrical system, and our requirements were much less.”

Along with the assistance of over a dozen volunteers at the church, CCI installed the gear in time for Faith Community’s 2016 Easter program. Twenty of the ELE72940 eyeBall RGBWA 40-degree LED fixtures are now hung across the ceiling with six fixtures in the center. These shine color washes or 5600K crisp white light on four singers, while seven fixtures on each side are used for color washes. The other eight eyeBall fixtures chosen feature the 10-degree lens. Of those, five spots are used to illuminate the five band members, with the remaining three for guest spots.

They have also purchased two elektraLite eyeBall UV/IUV black light fixtures for backlighting or overhead lighting, although they can serve as truss warmers or shin kickers as well. The UV/IUV fixtures deliver fluorescent output at distances of more than 75 feet, perfect for the 80-foot-deep sanctuary.

“Big John” Murren, the Faith Community’s in-house lighting designer, operator and programmer, is familiar with products on the market. With 20 years of experience providing a wide range of stage lighting fixtures for bands in the neighboring states, Murren says he’s pleased with the eyeBalls. “They’re great economical fixtures and they come with the necessary data cords and electric cords to install right out of the box.”

Recognizing that not all churches have a seasoned in-house LD, elektraLite eyeBalls offer a built-in plug-and-play functionality with console-free master/slave operation, allowing ease of use for church crewmembers with little lighting knowledge.

Music Director Julie Showalter says the choir appreciates the heat relief from the LED fixtures. She actively collaborates with her husband, Jonathan, and Murren on lighting looks for two Sunday worship services and special programs.

The eyeBall’s versatility—including strobing features—and its portable application have enabled the church’s team to create some special effects for enhancing events. Sometimes an eyeBall shines inside the drum cage, punctuating percussion in the church band. For a weekly series the pastor conducted called “The Well,” Showalter says they sunk a couple of the eyeBalls inside a well that they constructed from landscaping blocks, allowing an appropriate heavenly light to emerge up through the depths of the onstage prop.

The lighting system “communicates” to the congregation as well, she explains. “It controls the service in that, when the lights come on and move, people stop talking and know that the service is starting. It’s a nice effect. It adds to the service and isn’t distracting.” Jonathan Showalter agrees, saying, “Lighting changed the attitude.”

Senior Pastor Dave MacDonald adds, “The sanctuary lighting now helps remind people that they are entering into a different environment from the friendly, noisy foyer. It’s subtle and yet doesn’t give the feeling that they’re walking into a production. It makes a room that is, frankly, too long for its purpose become intimate and warm.”

Any cookies that may not be particularly necessary for the website to function and is used specifically to collect user personal data via analytics, ads, other embedded contents are termed as non-necessary cookies. It is mandatory to procure user consent prior to running these cookies on your website.